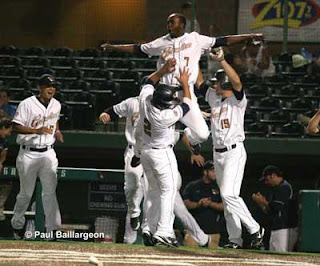 What a great game last night at GCS Ballpark!  The Grizzlies came from behind to defeat the Evansville Otters in walk-off fashion.  4-3 was the final score after John Shelby brought home Aaron Conway on a sacrifice fly to center to win it.  Gateway has now won two straight one-run games.  Below are a couple of Radio Highlights from last nights win, including the call of the walk-off. 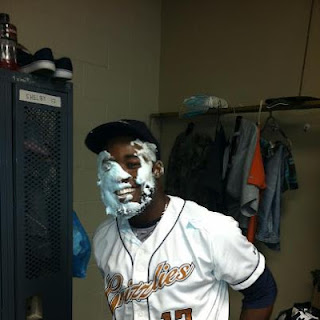 Vladimir Frias made some sparkling defensive plays once again at shortstop.  Included in the post are a couple of neat pictures from last night.  Paul Baillargeon (ActionImaging.com) captured Vladimir flying in the air after the win and then John Shelby got a pie to the face in the clubhouse during postgame.

Rubber game of the series is tonight.  St. Louis native Tim Brown goes for Gateway.  First pitch is at 7:05 and the Budweiser Pregame Show begins at 6:50 on the Grizzlies Radio Network.  Go Grizzlies!

Voice of the Grizzlies, Adam Young
Posted by Adam Young at 12:43 PM