The Grizzlies are back in action tonight as they look to avoid the series sweep against the Schaumburg Boomers.  Gateway suffered a 3-1 loss last night in a quick two-hour game at Boomers Stadium.  It was the fourth loss in a row for Gateway.

Injuries have really hit the Grizzlies hard as of late.  Chris McClendon is the most recent injury.  He was a hit by a pitch in the ninth inning two nights ago and has his right foot in a walking boot right now.  He's also using crutches from time to time.  Mac is listed as day-to-day with a right foot contusion, but I would have to think he will be out for a week and most likely longer.  He joins Landon Hernandez, Aaron Conway and Sam Mahoney on the injury front.

How about local product, Justin Dunning?? He was signed Tuesday morning by Gateway and shined in his debut Tuesday night and kept it going last night.  Dunning is 4-for-7 in two games and has also thrown out two runners trying to steal.

Jonathan Johnson continues to tear it up for GWY.  He's hitting .338 with a seven-game hit streak.  JJ has also played a great defensive second base. 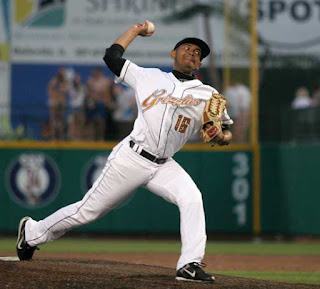 The Grizzlies will try to avoid the sweep tonight.  Rookie right-hander Jonathan Gonzalez will oppose Schaumburg righty, Tyler Watkins.  After the game Gateway will head to Avon, OH for three games with the Lake Erie Crushers.  We get to visit beautiful All Pro Freight Stadium..looking forward to it!

As always, you can listen to all Grizzlies games, home and road, on the Grizzlies Radio Network.  Tune in on 590 AM KFNS, 1400 AM KJFF, gatewaygrizzlies.com, kfns.com or the FREE KFNS App on your cell phone.  Go Grizzlies!

Voice of the Grizzlies, Adam Young
Posted by Adam Young at 10:38 AM