How about the Grizzlies as of late?? Gateway has won five of six, including two of three from the West Division-leading Rascals.  Pitching has been great, offense has been consistent and the defense has been good as usual.  Fun to watch!  Below is the radio highlight of the week.  It's a Chris McClendon homer against his former team, as heard on 1400 AM KJFF our affiliate station. 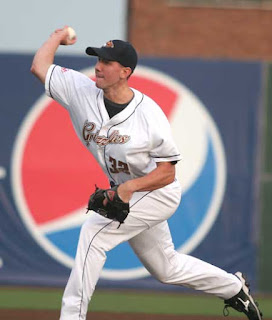 Gateway continues to deal with more and more injuries.  Vladimir Frias fractured his right thumb during the River City series and Jonathan Gonzalez injured his right arm during the series as well.  Due to the Gonzalez injury and the retirement of Cale Johnson, the Grizzlies rotation is juggled around.  Here's how it looks right now.

Today starts a nine-game road trip for the Grizzlies.  Game one of three against Normal is tonight and then the Grizzlies take on Rockford for three and River City for three.  Gateway enters action tonight only three games back of River City in the West Division.

As always, you can tune into the broadcast tonight on 590 AM KFNS, 1400 AM KJFF, gatewaygrizzlies.com, kfns.com and the FREE KFNS App on your phone.

-Voice of the Grizzlies, Adam Young
Posted by Adam Young at 10:43 AM