Hello all!  It was a great season-opening series for the Grizzlies @ GCS Ballpark.  Gateway took two of three from the reigning Frontier League Champion, Joliet Slammers.  After falling in the opener 7-1, the Grizzlies controlled the rest of the series, outscoring the Slammers 16-4 over the final two games.  Below are radio highlights from the first three games of the season!

Landon Hernandez had a HUGE series.  He is currently second in the league in batting average at .600 and he's tied for the league lead with 7 RBI.  Lando hit 2 HR's and drove in 6 on Sunday afternoon.

John Shelby and Jerod Yakubik both got off to good starts, while Jonathan Johnson got on base at a high rate over the week.  Overall, the Grizzlies scored 17 runs in the three games. 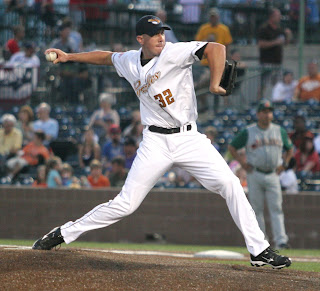 The defense and pitching have been outstanding so far.  The Grizzlies only committed one error in the three games while Tim Brown and Alex Kaminsky turned in quality starts.  The bullpen has been solid as well.  John Shelby, Vladimir Frias and Chris McClendon  made some spectacular plays defensively over the weekend.

Time now for the Grizzlies to hit the road for six games.  I'm writing this from the bus on our way to Washington, PA.  Gateway takes on Washington Tuesday-Thursday before heading to Canada for three with the Rippers over the weekend.  More to follow in the coming days.  Talk to you on the Grizzlies Radio Network Tuesday night at 5:50 CT for the Budweiser Pregame Show.  Go Grizzlies!

Voice of the Grizzlies, Adam Young
Posted by Adam Young at 11:15 AM