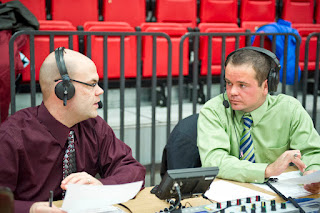 It's hard to believe, but the college basketball regular season is coming to an end shortly.  This season really flew by, with this being my busiest college basketball season on the broadcasting front.  I had the good fortune of being on the microphone for roughly 75 games this winter @ the Division I, II and III levels.  It all started in early November with my first appearance on the McKendree Men's basketball front with 'Meet the Bearcats' night for Harry Statham's team.  In one way or another, every team I called games for this season had success, with SIUE Women's Basketball having the most successful season. 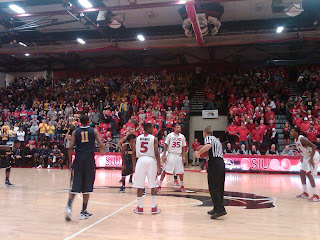 There is nothing like College Basketball.  I agree that March Madness is the best time of the year, but to me, the whole season is special.  Getting the chance to see a team and players progress from November to March is a real treat.  With SIUE now in the Ohio Valley Conference, checking the standings and following the rest of the league is exciting and makes the season even better.  I'm excited to be able to do that next season with McKendree becoming members of the Great Lakes Valley Conference. 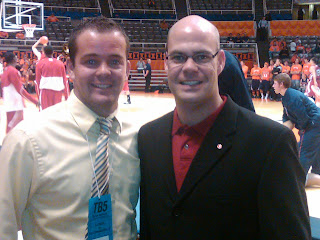 One of the things I enjoy most about my job is traveling to the different campuses and arenas.  My first trip of the season was to Assembly Hall @ the University of Illinois.  That was a real joy for me, getting to call that game with Joe Pott.  One of my favorite arenas I visited was SIU Arena @ SIU Carbondale.  I made it there twice this season, once for SIUE WBB and once for MBB.  It's an oustanding arena and one of the best I visited. 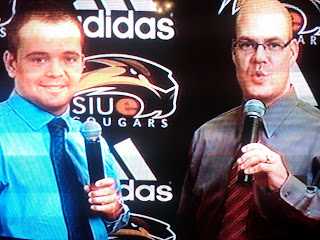 While I love radio and everything that goes into a radio broadcast, it was exciting to do TV games this season.  Joe Pott and I had the fortune of being a part of TV broadcasts all season for SIUE WBB and MBB.  Numerous MBB games aired on KPLR 11.2 while every home game for both team's aired on SIUE TV.  That meant TV opens, halftime and postgame hits, the usual TV broadcast kind of things.  Not only did I get the chance to grow as a radio broadcaster, but I also grew on TV during the season.  Can't ask for much more than that.

At least one college basketball broadcast remains for me.  SIUE finishes up the regular season on March 8th with a home game against the SEC's Arkansas Razorbacks, who beat #9 Tennessee on Thursday in Knoxville (impressive).  With an 18-9 record (12-4 OVC), the Cougar WBB team has a chance to play in the WNIT.  They of course aren't eligible for the OVC Tourney and the NCAA Tourney because of this being the final year of transition to D1, but they are still eligible for the WNIT.  That would be a huge day for SIUE Athletics if SIUE WBB gets invited to the WNIT.

I'll stay busy in the Spring with roughly 60 broadcasts scheduled between SIUE Softball and McKendree Baseball.  My spring broadcast schedule begins this coming Saturday with SIUE Softball from the Coach B Classic @ SIU Carbondale.  The Cougars have Northern Illinois and Western Illinois on Saturday and Wright St and tourney host SIUC on Sunday.  McKendree baseball broadcasts get underway next Saturday.  Can't wait!