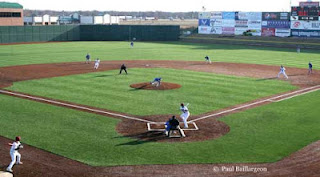 Baseball began @ GCS Ballpark earlier today as Lindenwood-Belleville broke in the new field turf (photo courtesy of Paul Baillargeon/ActionImaging.com) with a doubleheader against Southeastern Illinois College.  It wasn't Grizzlies-Rascals or Grizzlies-Miners, but it was great to see baseball back @ GCS Ballpark.  I know I'm starting to get baseball fever.  Watching pitchers and catchers reporting and watching recent practices at GCS, I'm getting that baseball itch again.

I've said it before on my blog and I will say it again, it doesn't matter what sport I'm calling, I just love being behind the microphone.  I enjoy the challenge of describing the action on the court, field or ice.  With that said, I was reminded today at GCS Ballpark why minor league baseball is so great..

During game one of Lindenwood-Belleville's doubleheader, I peeked my head outside of the Grizzlies front office to watch a couple minutes of the action (I find myself doing this quite often)..and then I saw a familiar face walking along the concourse.  I waited a while to make sure it was him and then I made my way over to say hi.  It was recent Grizzlies signing, Aaron Conway.  He's a Troy, IL native and a former Triad Knight.  I introduced myself and had a nice chat with the former Missouri State outfielder.  We talked about the team, his off-season workouts, the bus rides to come this season and his former college teammates that are members of the Grizzlies.  His excitement was evident..every time he brought up the season, his face lit up.  You could tell the passion and anxiousness.  Aaron told me, "I can't wait to get going..I wish we started tomorrow."  He's getting the chance to not only play professional baseball, but he's going to do it close to home in front of family and friends.  After we got done chatting, he went into the Grizzlies Baseball Academy and took some hacks as he began preparation for his first professional baseball season in a couple of months.  I know I'm the broadcaster and shouldn't have favorites, but Aaron makes it easy to root for success on his part. 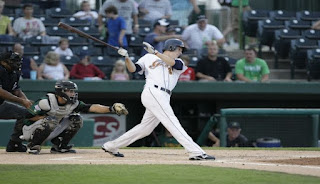 As time wore on today, it dawned on me.  Sometimes I forget what's so great about minor league baseball and how lucky I am to be around it.  No one loves the the long bus rides and long hours that that go along with minor league baseball, but sometimes we forget why we are here.  With Aaron and every other player that will report to GCS Ballpark in early May, there is a dream...a dream to make it to the next level and eventually the Major Leagues.  Myself and the fans get to take part in the crazy ride to that dream with the players.  Former Grizzlies outfielder Jason Patton recently got a chance to move on and play at the next level with his signing with the Arizona Diamondbacks.  It couldn't happen to a better guy and a harder worker.  To say he's deserving of this chance is an understatement.  That's what minor league baseball is all about.  I'm thrilled to spend another season with the Grizzlies, watching the player's chase after their dreams.

-Voice of the Gateway Grizzlies, Adam Young
Posted by Adam Young at 12:09 AM