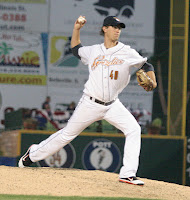 Hello all!  Roughly three months after trading away top slugger Charlie Lisk, Grizzlies Manager Phil Warren has traded away top pitcher Mark Brackman (all photos courtesy of Paul Baillargeon/Action Imaging.com).  The tall right-hander from Kansas City has beeen the team's ace since he arrived to town in 2009.  Brackman was traded to the Lancaster Barnstormers of the Atlantic League for a player to be named later.

Bottom line:  It gives Mark a better chance to make it to affiliated ball.  He was drafted by the Detroit Tigers in the 16th round of the 2007 MLB Draft.  Back then, he was a thrower, now he's a pitcher.  Brackman has been mowing down hitters the last two seasons.  Before he was traded, many people said he was the best pitcher in the league (I agree).  Often times the question was asked to me.."why isn't Brackman in affiliated ball?"  My answer was always, "don't worry, he'll get his shot again."  While he isn't back in affiliated ball yet, I feel like a good start to the season in Lancaster will leapfrog Brackman into a signing. 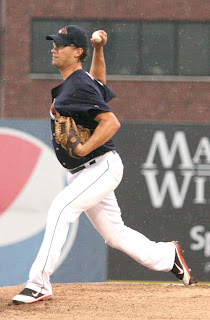 Lancaster is the same organization Scott Patterson went to after his time with Gateway (Patterson was also 26 at the time).  Patterson, of course, eventually made his Major League debut with the New York Yankees in 2008.  I never saw Scott Patterson pitch while at Gatway, but the two have similar body types and put up similar numbers in a Grizzlies uniform.  This is a GREAT opportunity for Brackman.  I have a feeling we are going to be talking about Brackman for year's to come.  Big things are ahead for the 6-7 righty..here's hoping he gets a fair shot.

Taking a final look at Brackman's numbers at Gateway:  He started 55 career games, while notching 26 wins.  He completed 10 games during his career, compiling 380 2/3 innings and striking out 332 career batters.  Brackman wraps up his Grizzlies career tied for the all-time lead in shutouts with three and one shy of Gateway's all-time complete games mark.  He won 13 games in 2010, while going 10-0 in the second half of the season.  In 2011, Brackman finished with a 2.15 ERA, the lowest ERA for a Gateway starter in a single-season.

As a Grizzlies fan, you knew that your team was going to have a great chance to win every time he took the mound.  It was a joy watching big #40 toe the rubber.  He will be missed.  It's time now to sit back and watch his career take off.

Side note:  A big congratulations to former Grizzlie Jason Patton on being signed by the Arizona Diamondbacks.  Well deserved for Jason!

-Voice of the Grizzlies, Adam Young
Posted by Adam Young at 4:32 PM