The Grizzlies have re-signed two players and added a new player since I posted last.  Starting pitcher Erick Carillo and middle infielder Brian Harris return for their second season with the Grizzlies, while starting pitcher Cale Johnson joins the 2012 Gateway roster. 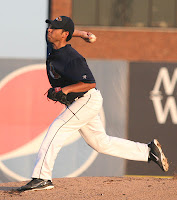 Carillo (pictured right:  photo courtesy of Paul Baillargeon/ActionImaging.com)  had some impressive outings in his short time with the Grizzlies last season after coming over in a trade with River City.  He will compete for a spot in an already deep Grizzlies rotation.  Skipper Phil Warren has a lot of arms to choose from, which is a good thing.  Carillo is a former 19th round pick of the Marlins in '09.  He had two good years in the Marlins organization before getting released and joining River City's rotation.  The upside on Carillo is high.  I expect to see great things from him this season.

Harris (pictured left: photo courtesy of Paul Baillargeon/ActionImaging.com)  is also a former River City Rascal.  He was traded to Gateway in June 2011 for slugger Jason Patton.  Brian played second and shortstop for Gateway last season.  He has shown he can be slick with the glove, but has been inconsistent at the plate.  Harris spent a year in the Tampa Bay Rays orgnaization after an impressive college career at Vanderbilt, where he was an all-SEC selection.  Brian will compete for a spot in the Grizzlies middle infield during Spring Training. 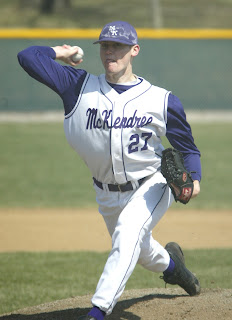 Johnson (pictured right:  photo courtesy of McKendree University Sports Information) is the newcomer among the trio.  He's a well-known name in the area because of his college success on the mound at McKendree University in Lebanon, IL.  Cale went 21-7 in his final three seasons at McKendree before getting drafted in the 41st round of the 2009 MLB Draft by the St. Louis Cardinals.  Johnson spent 2009-2011 in the  Cardinals organization.  In 2011, he pitched exclusively out of the bullpen with single-A Quad Cities.  His numbers weren't eye-popping, but they weren't poor by any means.  Johnson was in the bullpen for the River Bandits and got lost in the shuffle.

Gateway is giving Johnson a new opportunity.  Warren told me earlier today that Johnson goes into camp projected as one of the Grizzlies starters.  He's hoping that Gateway will give Cale a chance to make it back to affiliated ball as a starting pitcher, just like he started his journey.  The rotation is really starting to look strong for the 2012 season.  Johnson figures to be a key part of that strong rotation.

101 days until Gateway Grizzlies opening day.  Are you ready??  I can't wait!

-Voice of the Grizzlies, Adam Young
Posted by Adam Young at 3:53 PM