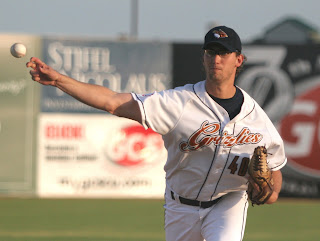 Hello All! Today is a big day for the Grizzlies with the announcement that Gateway 'Ace' Mark Brackman is coming back!  This is huge on-field news for the Grizzlies, who are searching for their first playoff berth since 2008 (All pictures are courtesy of Paul Baillargeon/ActionImaging.com).

Brackman (pronounced Brock-man) had an injury plagued 2011 season, but still finished with seven wins and the best ERA in the Frontier League at 2.15.  He's a two-time FL All-Star and in my eyes the top pitcher in the league.  When Brackman toes the rubber, fans fully expect the Grizzlies to win..it's that simple.  You almost know exactly what you're going to get out of the tall righty from Kansas City, MO.  He works quickly, goes deep into games, is never phased by runners on base and always gives him team a chance to win.

Brackman is the Ace of the Grizzlies...no doubt about it.  Even when the Grizzlies had Aaron Shafer (now at Double-Mississippi in the Braves Org.), Mark was still the ace.  Even when he doesn't have his 'best' stuff, he still finds a way to get the job done.  His command is impeccable and his stuff is as good as anyones in the FL. 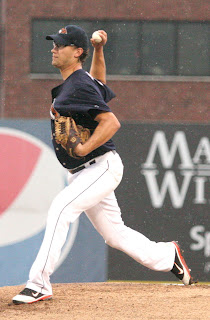 There are certain guys you see, whether it be pitchers or position players, that stand out...Brackman is one of those.  If he got picked up by an MLB Club next year, I wouldn't be surprised.  Mark is 26, which is the age that Scott Patterson was when he left the Grizzlies for affiliated ball.  The rest was history for Patterson, who made his Major League debut in '08 with the Yankees.  Brackman has spent some time in affiliated ball.  He was drafted in '07 by the Tigers and pitched in their system through '08.  He was a thrower then, not a pitcher.  Brackman has a big frame (6-7 230) and back then he was trying to blow fastballs by people.  He learned the hard way and found out in game situations that it wouldn't work, even against player's in the low levels of Minor League Baseball.  Mark was the same way when he pitched for GWY in '09.  He struggled, losing 10 games and barely getting his ERA below five to finish the season.  Then something clicked.  He  became a pitcher and started to locate as well as anyone in the league.  '10 was a career year for him..13-4 and the runner up for Pitcher of the Year honors in the league.  Brackman is now a veteran and he pitches like one..often times out-smarting opposing hitters. 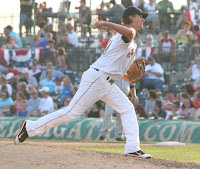 I know many of the fans are as excited as I am to get to see Mark Brackman throw again for the Gateway Grizzlies.  2011 figures to be a record-breaking year for him.  He is closing in on numerous different career pitching records at Gateway.  For the full release on the Brackman signing and the records he is chasing, check out the link below.  Go Grizzlies!

-Voice of the Grizzlies, Adam Young
Posted by Adam Young at 3:17 PM