As promised last week, here's my post on the Grizzlies most recent transactions.  Gateway has re-signed right-handed pitchers Ryan Juarez, Sean Toler and Tyler Heil.  Here's my thoughts, taking a look at each pitcher individually (All photos courtesy of Paul Baillargeon/ActionImaging.com). 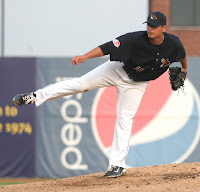 Ryan Juarez:  Ryan returns to GWY after being named the team's Rookie of the Year in 2011.  He had a strong late July-early August, winning four consecutive starts during the span.  Ryan was one of the hardest workers and toughest competitors I saw last season in the Frontier League.  His finals numbers in 2011:  4-4 5.22 ERA 11 G 9 GS 50 IP 25 SO.  I still remember Ryan's pro debut at River City..he came out of the 'pen and went right after the toughest lineup in the FL.  Grizzlies Manager Phil Warren is looking for more consistency from Juarez in 2012..I think we'll see that. 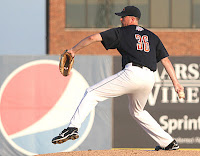 Sean Toler:  Sean pitched for GWY in 2010 before being traded traded away to Windy City.  After finishing off '10 very strong with the T-Bolts, Toler started '11 with River City before being traded back to GWY.  Toler showed glimpses on the mound, but it was clear he wasn't the same pitcher as he was in '10, and health was a big reason.  Toler is still 24 and has one of the best arms on the Grizzlies staff...the biggest key for Sean in 2012 is to stay healthy.  If healthy, we should see the '10 version of Sean Toler.  He's expected to pitch out of the bullpen for Gateway. 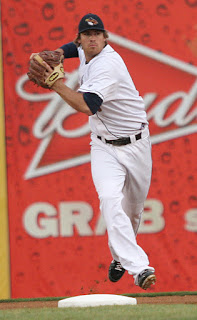 Tyler Heil:  Tyler will make the full transition from position player to pitcher in 2012.  This is the first time Heil will be able to put his whole focus into his work on the mound.  He tossed eight innings and recorded a 2.25 ERA in five appearances in 2011.  Heil made a started on August 31st @ Florence, surrendering only two runs while striking out four in four innings.  It's still unknown where Heil will fit into the pitching staff...even Phil Warren doesn't know.  Tyler might start and he might relieve..he's the big question mark heading into camp.  I'm excited to see the progess Tyler Heil makes with his focus solely on pitching.

GWY has signed some newcomers..I will introduce you to those new Grizzlies in the coming weeks.  Go Grizzlies!