Hello all!  If you keep close tabs on the Grizzlies official website (www.gatewaygrizzlies.com), then you are aware that the Grizzlies have signed six players recently.  I'm extremely excited about each of the players re-signed..all six guys are quality players.  I'm here to breakdown each player and give you an idea of what I expect from each player in 2012 and also a little bit of  what Grizzlies Manager Phil Warren is looking for.  Also, below is a clip from a late-season game in Marion when the Miners clinched a playoff berth.  I'm confident next year I'll be making that call and say the Grizzlies are heading back to the playoffs!

MINERS WALK OFF AGAINST GRIZZLIES AT RENT ONE PARK


First off I'll start with the four pitchers signed. 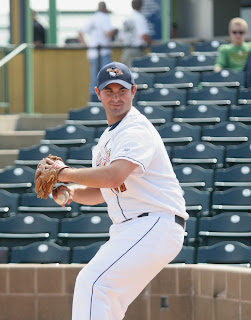 Chris Enourato: Enourato (pictured right:  all photos courtesy of Paul Baillargeon/ActionImaging.com) was the team's 2011 Pitcher of the Year.  He led the team with 11 saves, tied for the team lead in appearances with 39 and was named to the Frontier League All-Star team.  I'm a big fan of Chris and his ability on the mound.  He won't overpower you, but he has impeccable command and great composure.  He was a closer in college at West Virginia (and a very good one at that), but Phil has decided to put him in the rotation for next year.  If the transition doesn't go well, Phil will move him back to the 'pen, but at least for now Chris Enourato is a starter.  I'm intrigued by this move.  Phil's reasoning is Chris has enough pitches to be a starter and he feels Chris going 6 or 7 gives this team a better chance to win and Chris a better chance to get noticed.  We'll see how it pans out come May.

Richard Barrett:  Richard was a bright spot out of the bullpen during the tough 2011 season.  At times, he and Enourato were an outstanding 1-2 punch at the back end of the 'pen.  Now, the skipper expects Richard to be a closer and dominate the end of games.  He certainly has the talent to do so.  Richard has some of the best stuff in the league.  He is still young at 23 and his best years could very well still be ahead of him.  Having Barrett and Derrick Miramontes at the end of games should be tough on opponents.

Paul Tremlin:  Paul was a quality reliever in 2011 before being sidelined at the end of the season because of irritation in his elbow.  Paul is only 22 and is another guy Phil Warren has decided to put in the rotation during camp.  Paul is long and lanky, throws hard and showed good command as a true rookie.  Paul Tremlin could very well have a breakout year in 2012.  The ceiling is very high for him.

Jordan Cudney:  Jordan had arguably the best finish to the season of any Grizzlies pitcher.  He tossed an absolute gem in a spot start during the final weekend of the season (6ip 1h 0r 8so).  Jordan was also throwing against the league's best offense, River City.  He's another guy who will most likely be looked at as a starter.  At least heading into camp, it appears the Grizzlies will have a ton of starters to look at, which is a good thing.  Cudney is another young, powerful arm with a number of quality pitches.

Here's a look at the two position players signed by GWY. 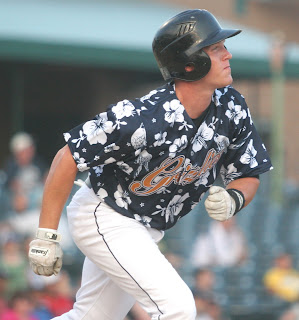 Kent Gerst:  Kent is a guy with Triple-A experience and has been in pro baseball for a number of years..but he is only 23.  The upside is high for Kent Gerst.  Phil Warren said he is hoping for a career year from Kent Gerst...I am as well.  He is certainly capable of that, if healthy.  He works hard and is a great guy off the field.  Kent is a rare commodity in this league..he has hit for average, power and has displayed top of the league speed as well.  If Kent gets off to a hot start next year and is signed by an MLB club early on, it wouldn't suprise me.  If Kent comes to camp healthy, watch out.

Case Rigby:  At 5-11 225 and seemingly no true position on the field, Case isn't your prototypical baseball player, but man did he have some kind of a season with GWY in 2011.  .354 average in 24 games, which included 12 multi-hit games and nine RBI.  He was fun to watch.  Reminded me a little bit of Kevin Youkilis to tell you the truth.  He wasn't flashy at 1B, but got the job done.  Phil says he's interested to see what Case looks like in May when camp begins.  He has some things to work on in the offseason fielding wise, but no one can deny how well he can hit.  I think Case will be a big part of the 2012 club.

That's the outlook for the recent re-signings.  It the next week, expect a release on the team website about the Grizzlies re-signing of Tyler Heil and Ryan Juarez.  I'll also post my thoughts about those two guys coming back right here on my blog!!

192 days until Opening Day.  In the meantime, contact me to get your season tickets ordered!  Go Grizzlies!!

-Voice of the Grizzlies, Adam Young
Posted by Adam Young at 2:24 PM