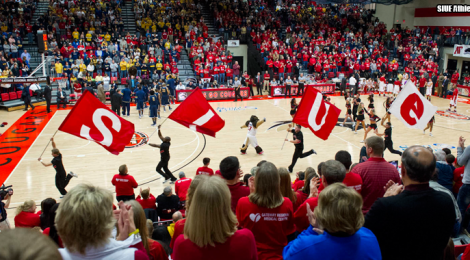 SIUE Cougars Men's Basketball wrapped up arguably their best week @ the Division I level with a 67-60 upset win over the Murray State Racers Saturday afternoon in Edwardsville.

After coming back from an eight point deficit with two minutes to go on Thursday against Austin Peay, the Cougars showed no signs of fatigue despite a quick turnaround.  Murray State came into the game as the only unbeaten team in the Ohio Valley Conference (5-0).  The win was the second straight for SIUE against Murray State..both coming at home.

SIUE is now 3-0 @ home in conference and in second place in the OVC West Division.  They have put themselves in a good position to make the conference tourney through the first six games.

The biggest question now is can SIUE win on the road?  The Cougars are currently 0-8 on the road with three straight road games coming up starting Thursday @ Southeast Missouri State.  In my postgame interview with Associate Head Coach Matt Laur (found below) on Saturday, he called SEMO the most talented team in the league despite their struggles early on in conference play.  After SEMO, the Cougars have road games @ struggling UT Martin and the improving Eastern Illinois Panthers.

There was a lot of energy in the Vadalabene Center (nearly 3,000 fans) Saturday and down the stretch the VC was about as loud as I've heard it late in a game.  Right now the Cougars are playing with energy and confidence.  Great to see the hard working players and coaches taste success.  The players and this coaching staff deserve this success.