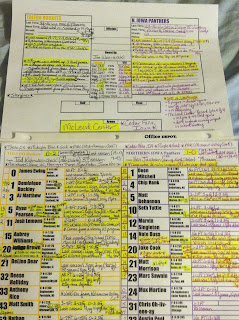 College basketball season is underway & basketball broadcasters across the country are trying to knock off the rust and get in rhythm as they call their first couple of games.

This is the time of the year when I listen to my games (and others) the most, trying to improve and sharpen my call.  I get a good number of emails from young broadcasters asking me "how can I get better
on the air and what do I need to improve on."  The best answer is get reps..the more you do it, the better you will be.  But the deeper answer is to focus on certain areas.  Below is a sample of my play-by-play from the SIUE/Missouri WBB game yesterday @ Mizzou Arena.  Also below are a few things I always keep in mind when I'm doing a broadcast and listen for when I listen back on my calls.

TIME AND SCORE:  It sounds elementary, but time and score is what the listener needs.  This is the point of emphasis in every sport, not just basketball.  When I'm calling a basketball game, my goal is to give time and score every change of possession (doesn't always happen, but that's what I shoot for).  The key is, don't say it the same way every time..mix it up and keep it fresh for the listener.  For example, one 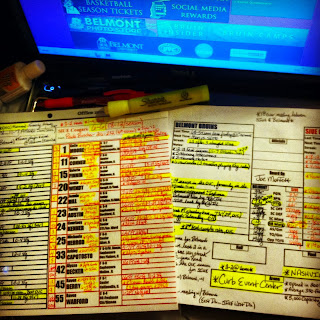 possession you may say, "Jones brings it across midcourt with the Tigers ahead by 13."  Next possession you can say, "Williams sets up the Tigers offense between the circles..Tigers 37 Hawks 21 with under 4 to go in the opening half."  Keep in mind you don't have to give time and score at the same time.  If the offense is moving and you don't have time, mix it up and give one of them later in the possession if you get a chance.  Just keep in mind, your listener NEEDS this.  It's the most important thing in the broadcast.  Also, ALWAYS give time AND score when heading into a break and coming out of a break.  Don't leave the listener hanging.

WHICH TEAM HAS THE BALL?:  Many of your listeners aren't familiar with all of the players on the floor, so do them a favor, and try to mention as often as possible which team has the ball.  For example, "Evans from three..no good front of the rim..Duke's Randolph leaps high for the defensive rebound."  Key words on a rebound are 'offensive/defensive'..lets the listener know if there is change of possession by saying defensive/offensive as often as possible.  Also, NEVER just say "Williams gets the rebound".  They 'snag, corral, leap high, weak side, front side, back side, ball side, strong side, right of the glass, in the lane, at the elbow, on the baseline.'  How did they get the rebound and where did they get it? 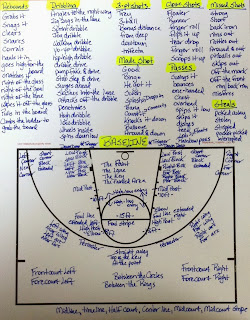 TAKE DESCRIPTION TO A WHOLE NEW LEVEL:  What separates the good broadcasters from the great ones is description.  Try to describe the action the best you can.  The best descriptive basketball play-by-play guy I listen to is Randy Lee, the Radio Voice of Western Kentucky University.  I started listening to Randy when I was in college, reached out to him then and now he's one of my mentors and we
stay in touch often.  He sends me audio of his, I save it and listen to it to try and get better.  The best way to become a more descriptive broadcaster is to listen to guys like Randy and also study descriptive terms.  To the right is a sheet I put together that I study often, which helps me during my broadcasts.

WHERE IS THE ACTION AT?  Remember, the listener CAN'T see what's going on.  Therefore, help the listener visualize by giving indicators, relative to where you are sitting and seeing the action..how big is the arena, what color are the uniforms, where is the team's bench relative to where you are sitting, where are the home team fans sitting, is the conferences logo in the lane?  Refer to it if so.  "For example, Missouri is moving left to right."  "Davis will shoot one more free throw to our right."  "Pepperdine head coach Mike Jone screams out the orders from the far right bench."  "Michaels zig-zags across midcourt in his home white uniform trimmed in red."

PREPARE, PREPARE, PREPARE?  Finally, the key to everything is being prepared.  Be ready to go when you head on the air.  Don't ever head into a broadcast not ready to go.  Spend hours on your spotting boards putting them together and studying them.  You should head into the arena on gameday ready to go.  The more comfortable you are, the better your call will be.  I always know what the players look like before heading to the arena on gameday.  Therefore, when the action begins I don't need to continuously look down at my spotting board to see who #12 is or who #20 is.  By looking at them, I should be able to tell immediately who they are.  In order to sound prepared, you need to be prepared.

Hope this is helpful.  Feel free to email me for questions/advice (youngpbp@gmail.com).  Have a great call!