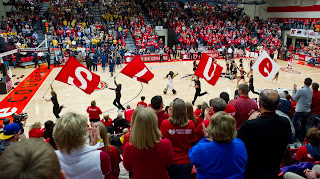 The SIUE Cougars battle in-state rival SIUC Monday night at SIU Arena in Carbondale.  The two teams meet for the third straight season with the Cougars looking for their first-ever win against the Salukis
(0-5 all-time).

It's safe to say this matchup is the most-anticipated game each season for Cougar fans who are looking for braggin' rights with their rivals two hours to the south.  On paper, the matchup looks close to even, but the Cougars have struggled in the past against the Salukis, especially on the road @ SIU Arena.  Two seasons ago SIUC comfortably beat SIUE 80-57 in Carbondale and last season it was a 71-55 Salukis win in front of a sold-out crowd @ Vadalabene Center.

The biggest key to a Cougar win Monday night is defense.  Opponents are averaging 81 ppg against the
Cougars this season while shooting 51% from the field and 41% from three.  If the Cougars are going to win the game they will need to keep the Salukis in the 60-70 point range.  SIUC averages 69 ppg, but outside of star players Desmar Jackson (21ppg) & Anthony Beane Jr. (12ppg), their options are limited on offense.  In my opinion the Cougars doing enough offensively to win games right now.

Notes
*SIUE has lost three straight games and are currently 0-5 on the road.
*This is SIUE's third straight road game.
*The Cougars have allowed 80 points or more in their last two games.
*SIUC star forward Desmar Jackson has 20+ points in 6/11 games
*The Salukis avg only 9 assists p/game, which is 340th/351 teams in the nation.

Looking forward to being on the call with Joe Pott Monday night @ SIU Arena.  Tune into the broadcast on the Cougar Radio Network starting with the pregame show @ 6:50.