It's the last week of April and Gateway Grizzlies Opening Day is getting oh so close..just 23 days away. 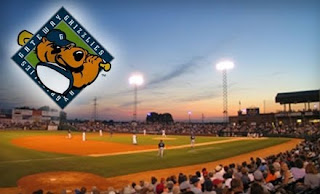 The players are excited, fans are anxious and of course, I'm ready to get started!  This is the best time of the year.  Players are trickling in to GCS Ballpark and Spring Training is only 8 days away.  It begs the question, what are we in store for in 2012?  Who's going to have a big year?  Can the Grizzlies contend in the Frontier League West Division?  Are we in store for a history-making season?  Those questions and more will start to be answered in a couple of weeks. 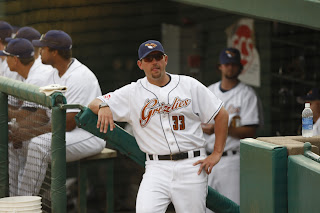 *Mike Breyman joins the Grizzlies coaching staff as the hitting coach.  He was one of the best hitters to ever play in the league and has turned into the leagues top hitting coach IMO.  Players love his coaching style and he gets the job done.  Just look @ his track record as the River City hitting coach..
*Starting pitching is all of a sudden a strength:  The Grizzlies starting pitching was quite frankly, awful in 2011.  Outside of Mark Brackman and the two starts from Aaron Shafer, the Grizzlies got nothing from their rotation.  In 2012 the rotation is experienced and deep.  There's a lot of talented arms who have put up solid #'s in professional baseball.  The starting pitching has a good chance to be a strength in '12.
*Watch out for Jerod Yakubik.  First off, I had the chance to meet Jerod today and he's as nice as can be.  He's one of those guys that will be easy to root for.  A former Pioneer League batting title winner, expect Yakubik to hit for a HIGH average.  He won't hit many homers, maybe only two or three, but he gets the job done with the stick.  He could be an outstanding two hitter.  He also plays a solid first base.

*I know I've talked about a lot about John Shelby..but I'm going to bring him up again.  The name John Shelby will be a household name this summer...he's that talented.  As people say, his play will be worth the price of admission (which is very affordable by the way).  A perfect blend of speed, athleticism and competitiveness.  He wants to win and as long as he's on the team, they will win.

To say I'm excited about the season is an understatement.  More to follow in the coming weeks.  Go Grizzlies!

-Voice of the Grizzlies, Adam Young
Posted by Adam Young at 10:16 PM