Many Grizzlies fans have been stopping by GCS Ballpark to check on the progress of the new field...I'm happy to report that starting next week, the process of laying down the field turf is expected to begin (barring weather issues).  The new field should be ready to go by mid-January.  I will post pictures consistently once they start laying down the turf..should be an exciting time here @ GCS Ballpark.  Feel free to come by the ballpark and check out the progress during the holiday season! 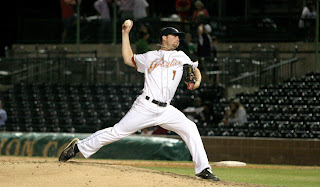 GWY Manager Phil Warren re-signed two more players this week..JR Boling (Pictured:  Courtesy of Paul Baillargeon/ActionImaging.com) and Jett Hart are coming back for another season.  Boling is a right-handed hurler who had an injury plagued 2011 season, but still managed to appear 20 times out of the Grizzlies bullpen.  He compiled a 4.40 ERA.  Hart was a late season addition, via trade from Joliet.  He showed promise batting out of the Grizzlies leadoff spot and playing in centerfield.  Both should be contributors come 2012.

Weather permitting, turf will begin to cover the playing surface @ GCS Ballpark next week..I'll have pictures for you.  Check back for that.  Happy Holidays!

-Voice of the Grizzlies, Adam Young
Posted by Adam Young at 10:01 AM