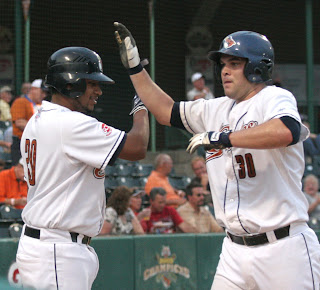 Hello all!  As promised, I'm back with some Grizzlies news.  Grizzlies catcher Landon Hernandez is returning for a third season (All photos courtesy of Paul Baillargeon/ActionImaging.com).  Hernandez was one of the top hitters for the Grizzlies during the 2011 season.  Below is a link to one of my 18 Landon Hernandez home run calls from 2011! 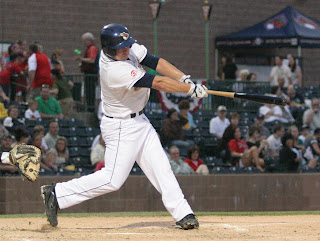 Hernandez, 24, enjoyed a breakout 2011 season.  He batted .250 with 18 homers and 46 RBI, while being named the Gateway Grizzlies Fan Favorite.  In 2010, Hernandez homered just two times in limited action as the team’s backup catcher.  The 6-1 230-pound backstop took over starting duties in 2011 and played in 86 of the team’s 95 games.  Hernandez got off to a blistering start to the season, ran into a mid-season funk, but finished strong.

“Landon had an outstanding year for us both offensively and defensively,” Grizzlies Manager Phil Warren said.  “With that said, I still think we haven’t seen the best of Landon Hernandez.  I think he has even more to offer in 2012.” 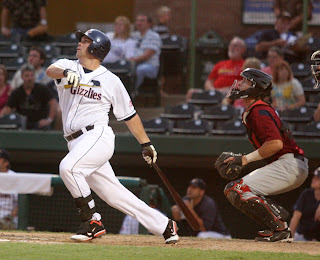 “Not only does he throw out runners at a high rate, but he also handles the pitchers very well,” Warren commented.  “Our pitchers enjoy throwing to him and he has great instincts behind the plate.”

Hernandez is currently playing winter baseball in Australia and excelling.  He was named to the South Australian All-Star team.  Hernandez returns in 2012 as one of the team’s top offensive threats.  With the trade of Charlie Lisk to River City, Hernandez has the most returning home runs.  Hernandez will also be searching for his first All-Star appearance when the 2012 Frontier League All-Star game takes place in Normal, IL in early July.

“Landon is an All-Star caliber player,” Warren remarked.  “When healthy and performing at the top of his game, he is the best catcher in the Frontier League.  He’s still young, but is considered a veteran to us because he has so much experience.  He’s a mature player and person.  We are thrilled to be bringing him back for another season.”

Voice of the Grizzlies, Adam Young
Posted by Adam Young at 10:41 AM