Hello all!  Thanks for checking in for the final time in 2011.  At this time of the year, most people like to look back at the year that was, and I'm no different.  Here are some of my thoughts from 2011.

*Tough year for the Gateway Grizzlies, but an exciting year for me as the lead broadcaster for the first time.  I was given the chance to take over for the great Joe Pott, and it was an unbelievable experience.  After spending an entire summer traveling and watching baseball every night of the week, as crazy as it seems, that's how I want to spend every summer the rest of my life.  There is nothing like it.

*The return of Saint Louis University Men's Basketball.  If you know me at all, you know that I'm a huge SLU basketball fan..always have been.  Billikens basketball is back and on a whole new level..can't wait to see what 2012 brings. 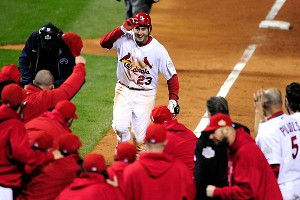 *St. Louis Cardinals 2011 World Series.  With the Grizzlies season taking place @ the same time as the Cardinals season, I'll be the first to admit that I don't get to follow the Cardinals as much as I used to.  Therefore, I'm not as big of a fan as I used to be, but I will always bleed Cardinals red.  What a run 2011 was for Tony La Russa's club.  It was fun to watch. 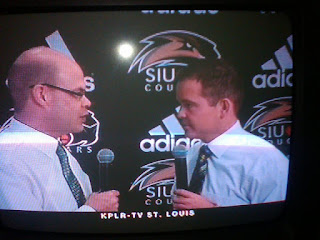 *Getting the chance to call Division I follow College Basketball for a full season has been a real thrill in 2011.  Joe Pott and SIUE gave me the opportunity to join the broadcast team and I have thoroughly enjoyed it.  Basketball is my passion and the sport that I feel is my best play-by-play wise.  Not to mention, I get to work with Joe every broadcast, which is a true joy.  Here's hoping SIUE Men's and Women's Basketball have a great 2012.

*2011 was a big year for me @ McKendree University.  Early in the year I began calling Hockey and Baseball for the first time and late in the year I called my first football game (McKendree win on homecoming against Trinity International University..I'll never forget that game) and became the PA Voice of McKendree Men's Basketball under legendary head coach Harry Statham.  I also was asked to be the PA Voice of McKendree Football in 2012.  It has been a great ride already with a great University.  I'm Announcing Football, Basketball, Soccer, Hockey and Baseball.  As long as they keep on giving me the microphone, I will continue to represent the University in a positive manner.  They have made me feel welcome and I know 2012 will be a great year to be a Bearcat.

That's my list..not very long, but I got to some points I wanted to cover.  As far as 2012 you ask?  I want a lot of things to happen.  I want to continue to improve every broadcast, add more content to my personal website (www.AdamYoungOnTheAir.com), call even more sporting events and catch that 'big break' as they say, but one thing has been on my mind ever since the 2011 Grizzlies season ended on September 4th.  I'm hungry, greedy and anxious..I want to see a GREAT 2012 season for the Grizzlies.  The fans deserve it, the coaching staff deserves it and the players deserve it.  I want to see a Frontier League Championship for the Gateway Grizzlies in 2012. I hope that isn't too much to ask. Enjoy the rest of 2011 and make 2012 a great one.  I know I will try my best to do so.  Happy New Year!