Hello all!  If you follow the Grizzlies closely, I'm sure you have read and/or heard about the completion of the Grizzlies/Rascals trade, that began on August 4th with Logan Parker heading to River City.  Last week, it became official that Charlie Lisk (Pictured below; all photos courtesy of Paul Baillargeon/ActionImaging.com) was the final Grizzlies piece heading to River City in a seven-person trade between the two teams. 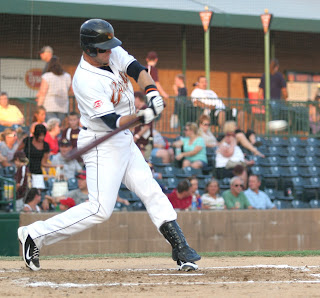 “Overall, It’s a very fair trade and we feel like we received four quality players and a first round draft pick for 2012.  With us out of the playoff hunt and Logan retiring, we essentially acquired five pieces for one.  We are extremely excited with the way it turned out.”

Lisk leaves Gateway as the team’s career leader in games played, at-bats, runs scored, total bases, hits, home runs and RBI.  The Wentzville, MO native began his Gateway career in 2007.  He is coming a 2011 season where he hit .294 with 24 homers and 94 RBI, both tops in the Frontier League.  Lisk is 28-years-old.   BUT, this deal is much more complicated than what most believe think.  Charlie lives in Wentzville, MO, which is MUCH closer to O'Fallon, MO then Sauget, IL.  He will save a ton of money on gas going to and from the ballpark.  Financially, this is a good move for Charlie and one that makes sense.  In my time here, Charlie was nothing short of outstanding.  His numbers speak for themselves.  I can understand why people are upset and confused, but as the Voice of this baseball team, I think the Grizzlies come out on top.  Logan Parker (Pictured Below) has retired, which Gateway knew he would do when they dealt time (hence him being traded to a winner for one more shot at a championship).  Charlie will put up great numbers once again in 2012, I believe...but, the Grizzlies received a ton of talent in return..let's analyze this deal. 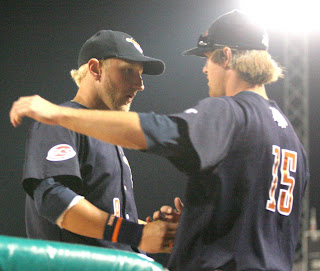 Robertson finished 2011 with a 9-4 record and a 4.50 ERA for the Rascals.  He appeared 26 times, starting 12 games.  The 6-1 195 left-hander from Des Moines, IA struck out 77 batters in 88 innings pitched.  Robertson, 23, was drafted in the 30th round of the 2010 MLB Draft by the Florida Marlins, where he went 1-2 with a 5.06 ERA.  He is a product of the University of Iowa.
“Zach is a solid, consistent lefty who will begin the season as a starting pitcher for us,” Warren remarked.  “He made big strides since entering professional baseball in 2010 and is really starting to come into his own.”


I have liked Robertson ever since he stifled Gateway in a late-June start at T.R. Hughes Ballpark.  He will fit in very nicely into the Gateway rotation.  He has a veteran demeanor, going right after hitters.  Robertson throws pretty hard, touching the low-90s.  He is also versatile..since college he has been bouncing back and forth between the bullpen and rotation.  Like Phil said, as of right now, he will begin the season as a starter.
Miramontes, 24, enjoyed his second straight impressive season with the Rascals in 2011, earning his first Frontier League All-Star selection.  He finished with a 9-2 record and a 2.21 ERA out of the bullpen for River City.  Miramontes pitched in 44 games, all relief, collecting 17 saves.  A 5-10 180 pound right-hander from Durham, CA, Miramontes went 3-3 with a 2.19 ERA and five saves in 44 relief appearances in 2010.  He is known for using multiple arm angles during his outing’s to keep hitters off balance.

“Derrick’s numbers tell the story,” Warren said.  “He is one of the top flight relievers in the Frontier League and a legitimate back-end guy.”


Miramontes has to be the most unique pitcher in the league, displaying numerous different arm angles and speeds on his pitches.  At times, he can be unhittable.  He struggled down the stretch in the regular season, including the final series with GWY, and that carried over to playoff struggles.  Hopefully that doesn't carry over to 2012.  I talked to Phil Warren last week and he expects Derrick to be a back-end of the bullpen guy for the Grizzlies, but not necassarily a guy who gets all the save chances.  Returner Richard Barrett will probably get save chances next year as well. 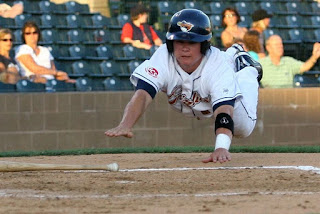 The final piece of the deal is McClendon (Picture right:  GREAT photo by the talented Paul Baillargeon/ActionImaging.com), an infielder, who will come to Gateway for a second go around.  McClendon, 24, only appeared in seven games for the Grizzlies in 2009.  The 5-11 190 pound Lufkin, TX native helped the Rascals collect the 2010 Frontier League Championship, batting .279 and stealing 33 bases.  In 2011, McClendon battled injuries, but still managed to hit .332 with four home runs in 56 games.  He played his college ball at the University of Kentucky.

“Chris is a spark plug and will fit in nicely at the top of our order,” Warren said.  “He is an outstanding third baseman and one of the key parts of the trade.”


Some people around the Frontier League said the best player on River City in 2011 was Chris McClendon.  On a team FULL of talent, many considered him to be the most important piece to the puzzle.  That is saying something!  Smooth with the glove at 3B, Chris will bat at the top of GWY's order (either first of second) and be as valuable as anyone in 2012.  He stole over 30 bases in 2010, batted over ..330 in 2011 and still has upside.  Phil Warren told me "I knew he was going to be a great player when we had him during 2009"...but an injury plagued 2009 season with GWY, and he wasn't invited back in 2010 (Donnie Ecker played 3B for GWY that year).  Chris McClendon is considered by many to be the centerpiece of this deal for the Grizzlies..if he's healthy, expect All-Star (maybe even MVP) type numbers for McClendon.
Phil Warren is hard at work building his 2012 roster..is there a chip on his shoulder?  Maybe...he's competitive and as hungry as any Manager I have come across.  He hates enduring 40 (2009) or 39 (2011) win seasons and wants to get back to the playoffs for the first time since 2008.  I like this deal a lot..yes, I hate to see Charlie go.  If you know me, it was no secret that Charlie was one of my favorites..for many reasons.  He is a heck of a player and he never was shy around the microphone (a broadcaster's dream).  Charlie-good luck at River City..Robertson, Miramontes and McClendon-welcome to Gateway..time to bring a Championship back to Sauget!
-Voice of the Gateway Grizzlies, Adam Young
Posted by Adam Young at 12:48 PM