Leading up to the 2011 season, hope and promise was surrounding the Gateway Grizzlies baseball team.  With a solid blend of returners and newcomers, talent was up and down the Gateway roster, but as they say, ‘you don’t win games on paper.’  The Grizzlies never found a groove and stumbled to a 39-56 record, their lowest win total since they won only 34 games in 2002. 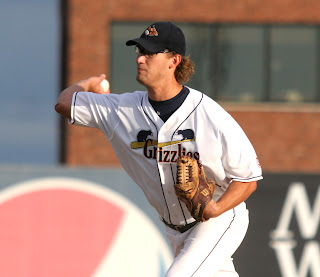 Gateway jumped out to an early 10-5 record and appeared to be destined for plenty of success.  With third-year Grizzlie Mark Brackman (All pictures in this story, courtesy of Paul Baillargeon/ActionImaging.com) and hyped newcomer Aaron Shafer anchoring the starting rotation and a loaded batting order, the Grizzlies endured two four-game winning streaks and won eight of nine from late May to early June.


Shafer, a former second round pick of the Chicago Cubs, lasted only two starts with Gateway before a big league club came calling.  The Atlanta Braves purchased Shafer’s contract and placed him at High-A Lynchburg, where Shafer shined.  The Moscow Mills, MO native finished the season at Double-A Mississippi.
Despite the hot start, June is when the wheels started to fall off.  Gateway suffered a 9-19 record during the month of June, their worst monthly record during the season.  Dropping back in the standings, the Grizzlies were never able to recover.  The Grizzlies never collected a five-game winning streak during the season, winning four in a row three times, but never five in a row.

Gateway sent their second player to affiliated ball in mid-June when Ryan Khoury was signed by the Boston Red Sox.  It was Khoury’s second go-around with the Red Sox, who released him in the 2011 Spring Training after he spent 2006-2010 with them.  Khoury batted .320 with five home runs during his stint at Gateway and excelled upon his return to the Red Sox organization, finishing the year at Triple-A Pawtucket. 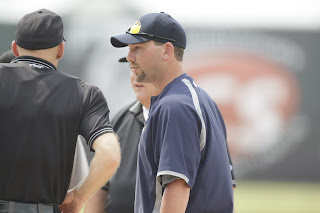 With the team all but out of the playoff chase in early-August, Grizzlies Manager Phil Warren began making roster moves.  The first move made by Gateway was a blockbuster trade, involving star slugger Logan Parker.  Gateway traded Parker and a player to be named later to River City for pitcher Erick Carillo and three players to be named later on August 3rd.
Gateway followed up the Parker deal with another trade on August 9th.  This time the Grizzlies sent outfielder DJ Fitzgerald to Windy City for a player to be named later.  Two days later the Grizzlies shipped fourth year Grizzlie Brandon Peters to Joliet for outfielder Jett Hart. 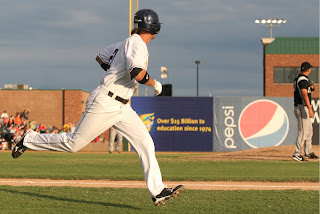 The Grizzlies offense shined once again in 2011.  Finishing second in the league in runs scored and home runs, Gateway was led by Charlie Lisk, Joe Agreste and Landon Hernandez, three mainstays throughout the 2011 season.


Playing in his fifth year with Gateway, Lisk had another remarkable season, earning his fifth Frontier League All-Star selection.  The Wentzville, MO native batted .295 with 24 homers and 94 RBI, both tops in the Frontier League.  At season’s end, Lisk was the Gateway Grizzlies career record holder in games played, at-bats, runs scored, total bases, triples, hits, home runs and RBI.  Lisk is also the Frontier League career leader in home runs and RBI.  He was named the Grizzlies team MVP for the third consecutive season.
Agreste had a consistent and productive 2011 campaign.  A 2009 member of the Grizzlies, the Chesapeake, VA native spent 2010 in the Padres organization, before returning to Gateway.  Tying a franchise single-season record with 94 games played, Agreste hit .291 with ten homers and 71 RBI.  Agreste set a new single-season franchise record for at-bats, notching 378, en route to his first ever Frontier League All-Star selection.


Hernandez had the most up and down season of the three Grizzlies offensive strongholds.  After a blistering start to the season, the second-year Gateway catcher ran into a mid-season funk, before finishing strong.  Landon’s end of the season production earned him a spot on the Frontier League Post-Season All Star team.  Hernandez batted .250 with 18 homers and 46 RBI, while proving he was the top defensive catcher in the league, throwing out over 40 percent of attempted base stealers.  He was named Gateway Grizzlies fan favorite at the end of the season awards ceremony.
Three rookies came to Gateway late in the season and helped the teams finish strong in August.  Clovis, CA native Case Rigby made the biggest impact of the three.  Batting .354 with nine RBI in 24 games, Rigby was one of the hottest hitters in the Frontier League down the stretch.  Derek Jennings and Jett Hart came to the Grizzlies from the Seattle Studs of the Pacific International League and played in all 21 games to end the season, batting at the top of the Grizzlies order in each game.  Jennings drove in nine runs while Hart homered three times and drove in ten.

On the pitching side of things, Gateway struggled once again on the mound, posting the third worst ERA in the Frontier League at 5.16.  Brackman led the Grizzlies pitching staff for the third consecutive season, inching closer to numerous Grizzlies career pitching records.  Despite a month long absence due to a right foot injury, the Grizzlies ace right-hander amassed seven wins and finished with a league-best 2.15 ERA, while tossing three complete games.  Brackman’s stellar first half of the season earned him a spot on the Frontier League All Star team.  He was the only Grizzlies pitcher to eclipse 100 innings.


Brackman was the only member of the starting rotation to start and finish the season with Gateway.  While Shafer was picked up by the Braves, the other members of the Grizzlies start of the season rotation, Josh Whitlock, B.J. Dail and Adrian Garza, were all released.
Blake Barber and Ryan Juarez, both true rookies, made key contributions to the Grizzlies straight out of college.  Barber, a Missouri State product, finished 4-3 with a 4.92 ERA.  Juarez, a product of Cal State Northridge, went 4-4 with a 5.22 ERA and was named Grizzlies Rookie of the Year. 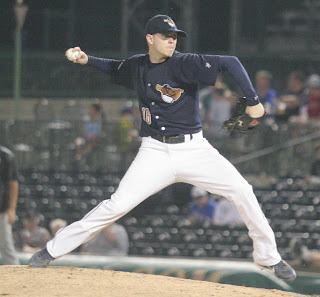 The Grizzlies bullpen was bolstered mid-season by the addition of two rookies.  Right-handers Paul Tremlin and Jordan Cudney enjoyed a good start in the professional ranks.  Tremlin appeared ten times and finished with an ERA just over four, prior to missing the final weeks of the season due to right elbow irritation.  Meanwhile, Cudney shined in the bullpen before notching a spot start on the second to last game of the season.  In that start, Cudney threw six shutout innings, allowing only one hit.  He finished 2011 with a 1-1 record and a 2.67 ERA.
Nick Walters, JR Boling and Chris Enourato started and ended the season with the Grizzlies, adding stability to the bullpen.  Walters, in his second season with Gateway, compiled a 2-1 record and a 2.81 ERA.  Boling, who battled injuries throughout the season, appeared 20 times and posted an ERA just over four.  Enourato started the season as a middle reliever, but quickly took over the role of closer, where he saved 11 games.  Enourato was named the Grizzlies Pitcher of the Year.
Warren completed his 5th season and with the team’s 39 wins, he moved into 8th place all-time in Frontier League Managerial wins.

Gateway finished third in the league in attendance, barely being clipped by Traverse City for second place.  166,072 fans came through the gates at GCS Ballpark for an average of 3,610.  The final attendance total helped mark the ninth straight year in which the Grizzlies averaged over 3,600 fans.  A franchise record 8,189 fans came through the turnstiles on Sunday, September 4th for the ‘Greatest in Baseball’ as the Grizzlies fell to the River City Rascals in the final game of the 2011 season.