Hello All!  Hope all is well wherever you are!  After taking two of three from Windy City over the weekend @ GCS Ballpark, the Grizzlies have stumbled so far on the road trip, going 0-4.  With that said, Gateway has really battled on this trip and there has been some exciting finishes.  Here's some info on those exciting finishes.

The Grizzlies have two games left on the road trip before having an off day on Monday and returning back to GCS Ballpark on Tuesday for a six-game homestand.  A pair of newcomer's will start for GWY, with RHP Erick Carillo going on Saturday and RHP Nolan Shaffer on Sunday.

Some positives from the road trip:

*Case Rigby has been a FINE addition for GWY at first base.  The California native can flat out mash, and he also plays a solid first base.  I'm excited to watch Case play the rest of the season and hopefully beyond. 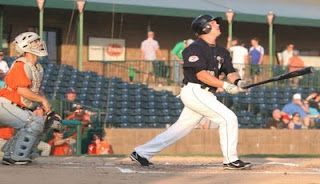 *Kent Gerst (Pictured right:  Courtesy of Paul Baillargeon/ActionImaging.com) has started to heat up.  The O'Fallon, MO native went 2-for-3 tonight with a Solo HR and 2 RBI.
*Gateway continues to stay competitive..every game during the trip has been close.  Let's see if GWY can start to take a couple of these close one's!
Posted by Adam Young at 11:50 PM