The Gateway Grizzlies have made a pair of trades during their current six-game road trip through the Chicago area.  Before game three with Joliet, GWY traded outfielder DJ Fitzgerald to Windy City for a player to be named later.  Then, early Friday, the Grizzlies announced they had traded veteran outfielder Brandon Peters to Joliet for outfielder Jett Hart.

Fitzgerald was hitting above .300 and doing a nice job since coming to GWY from the Cubs organization.  It's still unknown who Gateway will get in return, but I feel like Phil Warren and his coaching staff will get a great talent in return. 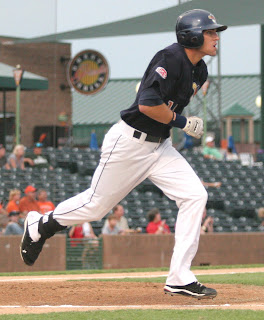 Peters (Pictured Right:  Courtesy of Paul Baillargeon/ActionImaging.com) has been with Gateway since 2008 and there is no doubt he has been a key face of this organization.  As Phil Warren has said repeatedly, 'he plays the game the way it's supposed to be played.'  It has been a true joy covering 'BP' over the years.  He was as well-liked as anyone in the clubhouse and he produced every season @ GWY.  An All-Star in 2010, Peters wasn't putting up 'BP' like numbers in 2011, but he was still playing well and working hard every day.  I speak on behalf of the Grizzlies Organization when I say he will be sorely missed.  Phil Warren made this move out of respect for Brandon, trying to help him win a championship w/ Joliet.

Best of luck to both Fitzgerald and Peters!
Posted by Adam Young at 11:59 PM