Grizzlies trying for the Sweep Tonight

Hello All!  After a rough 1-5 road trip through the Chicago area, the Grizzlies have come home and played some impressive baseball in front of their home fans.  After a 13-5 drubbing of the Southern Illinois Miners on Tuesday night (second place:  Frontier League West Division), the Grizzlies came-from-behind to take down Southern last night.  It was a dramatic win for Gateway.  After trailing 7-2, the Grizzlies chipped away at the deficit and entered the ninth inning down 8-6.  In came Miners closer Clayton Dill, who had yet to surrender a run in 2011..that didn't bother the Grizzlies though.  Gateway collected some early hits in the inning, tied the game on an RBI walk for Johnny Aldaz, and won the game on an RBI walk for Brian Harris.  What an ending it was in Sauget!!  Here's my radio call, as heard on1400 AM KJFF, an affiliate station on the Gateway Grizzlies Radio Network.  Click the link below.

GRIZZLIES WALK OFF AGAINST MINERS

The win was the first of the season for GWY when trailing after seven innings.  They are now 1-36 when trailing after seven and 7-16 in one run games.  Excited for tonight, as the Grizzlies look to pick up their first series sweep since June 3-5 vs. Rockford.  Rookie right-hander Ryan Juarez goes for GWY and veteran right-hander Ryan Zink goes for SIL.  First pitch is set for 7:05 CT.  I go on the air 6:50 CT with the Budweiser Pregame Show.  Would love to hear from you!  Email me in the broadcast booth during the game at ayoung@gatewaygrizzlies.com 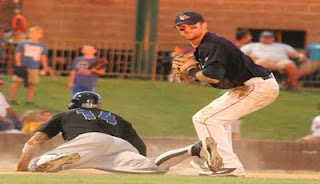 *Charlie Lisk (pictured right:  courtesy of Paul Baillargeon/ActionImaging.com) is now only nine hits away from tying Mike Breyman (2004-2008) for the Grizzlies all-time hits record (458).
*Tonight's Grizzlies starter, Ryan  Juarez, has won four of his last five starts.
*GWY is looking to win three games in a row for the first time since late July.

-Adam Young, Voice of the Gateway Grizzlies
Posted by Adam Young at 3:14 PM