Hello all!  Tonight is the final game of the 2013 season.  Despite the Grizzlies win last night at Southern Illinois, a Florence Freedom victory over Windy City eliminated the Grizzlies from the playoff race.  Gateway looks for a win tonight to finish their season 53-43.  The Grizzlies are looking for their third straight series win tonight. 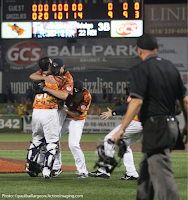 There were some great moments this season..here's a few of them:

It was a phenomenal pitching performance by the ace right-hander from St. Louis who pitched the Grizzlies to a 9-0 win and put his name into the Grizzlies record book.  It was the first Grizzlies no-hitter
since 2008 and just the second ever at hitter-friendly GCS Ballpark.  Brown walked two batters, struck out four, threw 122 pitches and had to work around two ninth inning errors to notch the historic feat.

Hernandez tied the franchise and league record with 3 HR's while breaking the team record for RBI with 8.  Hernandez did all of that in the first four innings of the game.  He grounded out to the pitcher in his final two at-bats in the game. 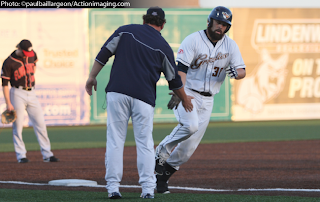 RADIO CALLS OF THE HERNANDEZ HOME RUNS
The Grizzlies bombarded the All-Star game with 9 players.  Landon Hernandez, Chris McClendon, Jose Flores, Ja'Vaun West, Tim Brown, Zac Treece, Richard Barrett, Jon Myers and Antone DeJesus were all named to the team.  Of the 27 players on the West Division roster, 9 were Grizzlies.  With a 32-19 first half record, the Grizzlies coaching staff directed the West Division because of the division's best record.

Assuming he plays in tonight's series finale, Jonathan Johnson will break the team-record for games played with 96.  Ironically, 'JJ' breaks the record that Jon Myers and him set in '12 (95).  Johnson has only missed one game in his two years with the Grizzlies.  Impressive stuff.

In the coming weeks I'll have an extensive season review.  Let's get a W tonight!  Go Grizzlies!

Voice of the Grizzlies, Adam Young
Posted by Adam Young at 11:03 AM