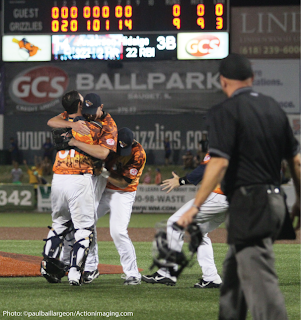 Saturday night @ GCS Ballpark was a night I will never forget.  At a hitter-friendly ballpark just outside of St. Louis, one of St. Louis' own fired the third no-hitter in Gateway Grizzlies franchise history.

Tim Brown will forever be remembered after his performance last night.  He had to work
around three errors (including two in the 9th inning) to finish off a whacky, crazy no-hitter.  By the way, solid work by official scorer Scott Cummings who was spot on for all three calls.

I've thought about it before..I think every broadcaster has at some point.  But I never thought I would actually get to call a no-hitter.  To be honest, I've never even been that close and I sure as heck didn't think I'd be calling one @ hitter-friendly GCS Ballpark. 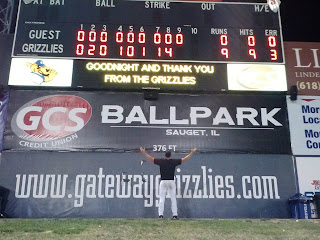 After Brown finished off the seventh inning, it really started to sink in that we could be experiencing something special.  He was six outs away and while no one in the pressbox came out and said anything, you could see the look in their eyes.  I've only been nervous on the airwaves a few times in my life and tonight was one of them, but it was a good nervous.  I don't think I've ever been as locked in as I was in the final two innings with Tim pitching.  I couldn't take my eyes off the right-hander from St. Louis.

The saying is true..you never know what you're going to see when you arrive to the ballpark that day.  Tonight I got to be a part of something special.  No, I wasn't on the field, but I got to describe the action to all the fans listening and hanging on every word.  Below is the call of the final out and the entire ninth inning audio.

FINAL OUT AS HEARD ON THE RADIO NETWORK

FINAL INNING AS HEARD ON THE RADIO NETWORK

Saturday, July 20th is a night I'll never forget.  Baseball is a grind..long days and nights with games every day.  Travel can get tiring and the season can drag on at times.  Moments like this we'll remember forever.  Watching Tim embrace his catcher Landon Hernandez gave me chills.  Two guys who have worked countless games together got to share that special moment together.  This team this year is something special.  It's a TEAM..no individual play..they are all out for the same goal - Championship.

Just like the players and coaches, I'll wake up tomorrow with a pep in my step wondering what I will experience that day.  Who knows, maybe we'll see another no-no.

Blessed to do this for a living.

-Voice of the Grizzlies, Adam Young
Posted by Adam Young at 12:15 AM