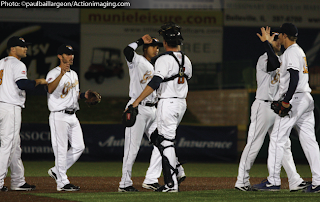 Hello all!  Thanks for checking out the blog.  How about those Gateway Grizzlies?? A 15-7 start to the season & and the Grizzlies are currently rolling along with a season-high six game win streak.

Pitching & defense has been the key for Gateway so far this season.  Gateway's team ERA is 3.27
(franchise record is 3.57/set last season) and the starting pitching has been outstanding.  Among the Grizzlies five starters, four have an ERA of 3.10 or better.  Right-hander Ja'Vaun West is off to a 4-0 start and 23-year-old Tucker Jensen appears to be a consistent, front line starter.  Tim Brown continues to shine and Gregg Downing struck out 11 batters in a superb start today.

Gateway's defense has only committed 15 errors in 22 games and they only have two errors in the last eight games.  The Gateway infield is as good as you will see..

The Grizzlies offense has been up and down so far.  The team average is just over .250, but the Grizzlies have certainly had some strong games offensively, including a 15-run outburst Tuesday night. 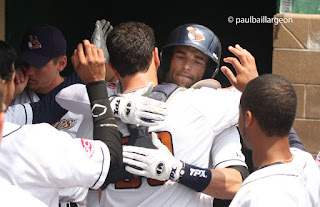 Jon Myers is pacing the Grizzlies offense with a .350 average that includes 5 HR's and 15 RBI.  Landon Hernandez has been turning it on as of late.  Lando drove in two of the three runs today and now has 4 HR's and 14 RBI.

Overall, not much to complain about if you're Phil Warren.  After today's win, the Grizzlies were only a half game back of Normal in the West Division..and guess what???  The Cornbelters come to GCS Ballpark for a three-game series this weekend.

Yes, it's early..but a great start to the season for the Grizzlies nonetheless.  Go Grizzlies!

-Voice of the Grizzlies, Adam Young
Posted by Adam Young at 9:22 PM