Hello all!  Opening Day is getting closer and closer.  Gateway opens up EXH play on May 7th @ Southern Illinois against the Miners.  The season opener is May 17th in Avon, OH @ Lake Erie.  Can't wait!

I had my monthly Manager's Chat with Phil Warren this morning @ GCS Ballpark.  Below is the link to
the full interview with the Grizzlies skipper.

Great stuff from Phil, as usual.  As he mentioned there is A LOT of pitching on the roster heading into Spring Training, which should make for some excellent competition.  There is roughly 10 guys who will be competing for 5 rotation spots.  With that said, some of the guys competing for rotation spots have bullpen experience and could end up being placed there.

Speaking of pitching, right-hander Jason Sullivan has been at the ballpark the last couple of weeks working out and getting ready for the season.  Sullivan was acquired in the Alex Kaminsky trade earlier this offseason.  Richard Barrett (who is also an instructor at the Grizzlies Baseball Academy) and Jason have been at the ballpark every day throwing and working out in preparation for the season.  I love to see that...guys who report to camp early, show dedication and a strong desire to succeed, are always guys I pull for. 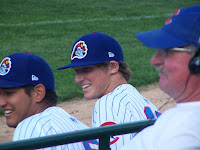 Phil had an intriguing signing recently.  He brought in Mt. Zion, IL native Ryan Hartman, who is only 20 years old.  Hartman has been in professional baseball since 2010 after getting drafted in the 16th round by the Chicago Cubs out of High School.

He's a 6-3 lanky right-hander with three years of professional experience.  Hartman is by far the youngest player on the Grizzlies roster.  In High School he was one of the top pitchers in the state and averaged over two strikeouts per inning during his JR year.  Reports I have read say he has an outstanding curveball and a heater in the low 90's.  I'm interested to see how he performs in Spring Training.