Hello all!  Opening Day is only 48 days away and we are exactly one month away from the start of Spring Training at GCS Ballpark..baseball will be back shortly Grizzlies fans!

Grizzlies manager Phil Warren has been extremely busy filling up his roster.  Numerous acquisions lately with the biggest one being the return of pitcher Logan Mahon.  Logan spent the entire '12
season with the Grizzlies before getting picked up by the Baltimore Orioles following the season.  He was released last week and now returns.

Logan was an integral part of the stellar Gateway bullpen from a season ago.  The 24-year-old went 2-1 with a 2.54 ERA in 33 relief appearances.  Logan is a former SEMO Redhawk who was drafted by the Rockies in the 22nd round of the 2011 draft.  One of the interesting things Phil Warren told me the either day is "Logan could be used as a starter or reliever for us..he's versatile enough to do both."  So we'll see how he is used.  Either way this is a great addition a month before the team gets going.

Phil also signed pitchers Tucker Jensen and Danny Martony.  Jensen went to Embry-Riddle University
(same college as Grizzlies reliever Phil Reamy) and spent the last two seasons in the Toronto Blue Jays organization, reaching High-A Dunedin.  He went 5-6 with a 4.31 ERA in 26 appearances (22 starts) over the two seasons.  His strikeout/walk ratio was excellent and the Grizzlies skipper has high expectations for this 23-year-old right-hander from State College, PA.  Don't be surprised if he is a front of the rotation starter out of the gate. 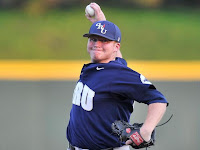 Martony enters pro ball after a nice college career at Division I Oral Roberts University (Summit League) where he went 9-1 in his three seasons @ ORU.  He only had one start in college so expect him to come in as a bullpen guy.

-Voice of the Grizzlies, Adam Young
Posted by Adam Young at 10:28 PM