Hello all.  The countdown continues to opening day..only 126 days.  I know it's only mid-January, but opening day will be here before you know it. 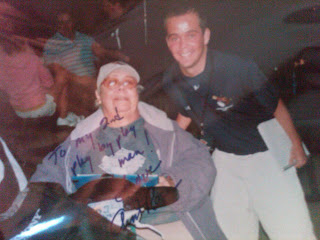 This week was a sad week for the Gateway Grizzlies.  If you keep tabs on the Grizzlies on facebook, then I'm sure you're aware that Aunt Rose, as she was referred to at the ballpark, passed away.  Aunt Rose was one of the Grizzlies most dedicated fans, a season ticket holder since the team's inception and a true historian of the team.  She was well known by the front office, players and fans.  If you were a regular at Grizzlies games, you knew who Aunt Rose was.  She was hanging K's from her right field picnic table seating area, keeping score of every game (Home or Road) and listening to every single game on the Radio (Home or Road).  I loved stopping by Aunt Rose's seats before or during a game and chatting about the team.  She was always optimistic, whether the team was winning or losing.  The Grizzlies were her team and she wasn't afraid to say it.   Aunt Rose loved baseball and most importantly Gateway Grizzlies baseball.  When I came to Gateway in 2009 as the No. 2 man to Joe Pott..one of the first things Joe talked about was Aunt Rose.  He always referred to Aunt Rose during the broadcast when a foul ball was hit her way.  I found myself doing the same thing last season.  I know she meant a lot to Joe and she meant a lot to me as well.  The Grizzlies front office will be heading to St. Theresa's in Belleville this morning for a 'Celebration of life Ceremony' for Aunt Rose.  RIP Aunt Rose.

The Grizzlies made a big addition to the ballclub yesterday with the signing of Edwardsville, IL native Aaron Conway (Picture from the MSU Athletics website), a former Triad High School star.  Conway played his college ball @ Missouri St, where he had an outstanding career.  He has a great chance to win a starting outfield spot in Spring Training.  He has great speed AND power.  Conway batted .298 in 192 career games @ MSU..he belted 14 homers and drove in 91 career runs.  He also collected 16 triples and stole 69 bases in his career.  I'm excited to see what Conway can do for the Grizzlies this season.

It's back on the road for me this weekend.  I'm heading with the SIUE WBB team to Nashville, TN later today.  We have DH action tomorrow from the Gentry Center @ Tennessee State University.  All the action starting @ 5:20 with the Women's game, followed by Men's action.  Joe Pott and I will be courtside for the call of both games.  Catch all the action on the Cougar Radio Network:  88.7 FM WSIE, 590 AM KFNS, KFNS.com and the KFNS App on your phone.  Go Cougars!