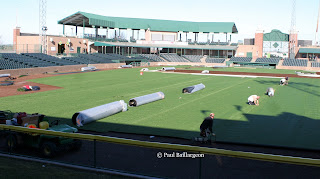 Hello all!  The transformation from grass to field turf at GCS Ballpark continues to go well.  The Grizzlies were happy to have Paul Baillargeon of ActionImaging.com stop by the ballpark on friday afternoon and take some pictures.  Paul has done an outstanding job for the Grizzlies over the years and once again, we are fortunate to be able to use his great photos.  All photos in this post are courtesy of Paul.  If you are looking for more of his work, check out www.ActionImaging.com.  Along with owner Frank Orris, Paul helps operate ActionImaging.  You can also see Paul's photos in numerous newspapers, most notably the Belleville News Democrat.  Enjoy these great photos! 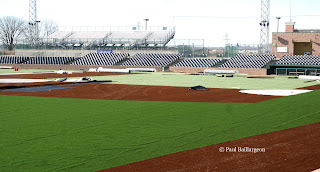 Quick note:  The Grizzlies traded away lefty reliever Nick Walters to the Wichita Wingnuts of the American Association for infielder Jonathan Johnson.  Hate to see Nick go, but this gives him a chance to go a league with more veterans and it appears to give him a better chance of getting picked up by an affiliated club.  Walters had two outstanding seasons with the Grizzlies.  He was unhittable in '10 and in '11 he was one of the Grizzlies most reliable relievers.  Grizzlies Manager Phil Warren mentioned to me numerous times during  the season, "Walters has a major league slider, but he needs to have better command of his fastball."  The lack of command with the fastball might be what is still holding Nick back.  Best of luck to Nick and welcome to Gateway Jonathan Johnson!

I'll stop by this week with more news and notes.  It will be a busy week of broadcasting for me starting Monday night with SIUE/Eastern Illinois Women's Basketball @ the Vadalabene Center in Edwardsville.  Have a great week and Go Grizzlies!

-Voice of the Grizzlies, Adam Young
Posted by Adam Young at 1:54 PM