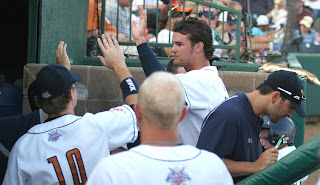 It's only January, but a lot of moves were made this week for the Gateway Grizzlies.  The most noticeable move for Grizzlies fans is a trade involving star outfielder Joe Agreste (pictured right: courtesy of Paul Baillargeon/ActionImaging.com).  Gateway traded Joe to Laredo in the American Association for a player to be named later.  This gives Joe a chance to head to another league and see if he can make it back to affiliated ball, where he was in 2010 with the San Diego Padres organization.  Joe's bat will be missed in the lineup, but I feel like this is a good move for him.  We wish him the best in Laredo. 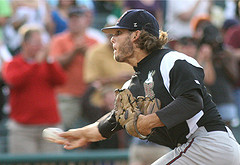 Gateway has also traded reliever Derrick Miramontes (pictured right) to Wichita (American Association) as part of a three-team trade.  Derrick was acquired by GWY in a September 2011 trade (involving Charlie Lisk).  Therefore, he never appeared for the Grizzlies.  Tough to see him go because he has been a great pitcher in the league, but the return value is VERY high.  As part of the trade, GWY receives top-flight starter Tim Brown, a St. Louis native.  Brown began his professional career in 2009 with the Lincoln Saltdogs (AA) and went 5-1 with a 2.59 ERA In 17 appearance (7 starts).  Brown was named the fifth best prospect in Independent Baseball by Baseball America after the '09 season.  He then spent time in the Phillies organization for their Gulf Coast League affiliate..put up great numbers..returned to Lincoln and has been a big time pitcher for them the last couple of seasons.  BIG signing for sixth-year manager Phil Warren.  I think Tim Brown will be one of the top starters in the FL this season.

Yakubik (pictured right: courtesy of milb.com):  34th round pick of the Los Angeles Angels of Anaheim in the '10 draft out of Ohio University.  He hit .307 @ Rookie ball in '10 and then won the Pioneer League batting title @ Rookie ball Orem in '11 (.372 avg).  Yakubik also had brief stints at single-A and high-A with the Angels.

Excited to see how all of the moves pan out.  Personally, I've very excited about the new additions and anxious to see how they perform on the field.  Grizzlies skipper Phil Warren has done and outstanding job assembling the Spring Training roster thus far.  Can't wait for players to report!

-Voice of the Grizzlies, Adam Young
Posted by Adam Young at 11:34 AM