The question I get most often  while working in the Grizzlies front office is "how is the team looking for the coming season?"  Well, that can be hard to answer.  After all, I'm not the manager or a coach, and all I do is call what's happening on the field.  With that said, I still do a lot of research and try my best to gauge what's in place.  Injuries and other things that can't be controlled always play a big part in how much success a team will have-I understand that-the 2011 St. Louis Cardinals are a great example of that with the injuries already to Wainwright and Punto, among others.

The 2011 Grizzlies will have high expectations because of the talent returning from a very good lineup a season ago.  If you're a Grizzlies fan, you certainly will recognize the names coming back.  Lisk, Peters, Ecker, Heil, Miraldi, Hernandez, Patton.  Those are names that were called often a season ago because of their production on the diamond.  Grizzlies manager Phil Warren has done a great job of getting these guys back and they will be the foundation as the Grizzlies try to build a Championship caliber team. 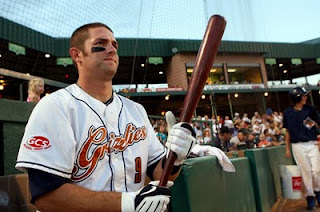 While all of the returners will play a huge rule, it's obvious that the hot name on the list of returnees is Charlie Lisk (pictured right).  The reigning Frontier League MVP returns for his fifth season with the Grizzlies and 11th total in Professional Baseball.  His #'s in a Grizz uniform are staggering-especially his 2010 MVP season- .303 21 HR 88 RBIs.  Lisk is now the all-time home run leader in league history after hitting his 87th FL home run in an Aug. 26th game in Florence, KY (passing former major leaguer Morgan Burkhart).  He carries the most feared bat in the league IMO..few would argue.  He's a leader, a mentor, and a heck of a ball player.  By the way if you never saw this story about Lisk, check it out. http://www.stltoday.com/news/local/illinois/article_65784ae4-9385-581b-9011-aaa3f127ab34.html.

The core around Lisk is exciting.  Jason Patton batted over .300 a season ago and was a mainstay in right field.  Brandon Peters had an injury-shortened '10 campaign, but played winter ball in Australia, and from all reports I heard, he was tearing the cover off the ball.  BP's career #'s @ Gateway, covering three seasons-148g .296 23 HR 95 RBIs.  Landon Hernandez will get more time behind the plate in '11 and is a guy to watch closely.  He will grow right before everyones eyes.  Big, powerful catcher w/ nice tools.  Donnie Ecker played in Australia with Peters during the winter.  He also had a good winter and should be a big part of the offense come May.  Ecker showed some pop in his 26 games with Gateway in 2011, hitting a career high four homers.   Matt Miraldi will play a bigger role with the Grizzlies this season, most would assume.  He's an athletic youngster with good family genes-father played seven seasons in the NFL and mother played college volleyball at UCLA.  He's coming off his first off-season as a professional and should come to camp ready to roll.  And finally, Tyler Heil is back after a fine rookie season.  He's a nice guy to have on the left side of the infield, whether it be at short or third.  He's solid in the field and also enjoyed a great '10 at the plate-.283 33 RBIs and 15 stolen bases-those are numbers just about any rookie would be satisfied with.

So those are the position players that are returning to Gateway.  I could've got more in depth, but then I'd be using all of my material for the broadcasts!  Don't want to do that before the season starts up!  Next up, I'll write about some of the newcomers.  I'm only going to write about the newcomers with pro experience.  With the exception of one guy-someone who played for Gateway in 2009-all the information I have about the newcomers with pro experience is from the interet doing research and Grizzlies manager Phil Warren.

Stay tuned, more to come on the 2011 Gateway Grizzlies.  Ahh, this is going to be a fun year..Go Grizzlies!
Posted by Adam Young at 4:48 PM