Well-so far, so good as far as me keeping the blog updated!  Things are getting busy around the office, but everything is coming together.  Single game tickets have been on sale for a couple of weeks and our pocket schedules just came in today.  Not much else to report, just ready for the season to start up!

Most recently I previewed the Grizzlies returning position players.  Time now to take a look at some of the newcomers.  I'm only going to list the guys that I have some info on and can talk about with intelligence. 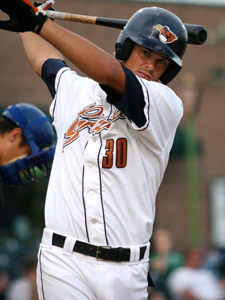 The first newcomer I want to touch on is not new to Grizzlies fans.  First baseman/Outfielder Joe Agreste (pictured right) played with the Grizzlies in 2009 and returns for a second go-around in 2011.  I'm excited for Joe to come back, because not only is he a great player, he's a phenomenal person.  He's truly a joy to be around and watch play.  Joe batted .303 as a true rookie in 2009 for Gateway.  He also smacked five homers and drove in 33 runs.  After the season he was named one of the Top 20 Independent Prospects by Baseball America.  Agreste was subsequently signed by the San Diego Padres and spent 2010 playing for three different team in the Pads system.  Hampered by an injury, Agreste struggled to get in a groove, bringing him back to Gateway for '11.  If you're wanting to see Joe play this season, I suggest coming to an early season game, because I wouldn't be surprised if he gets off to a hot start and gets signed by a MLB team to find his way back to affiliated ball fairly early.

A couple of other names that have caught my eye:  Lyndon Estill, David Phillips and Michael Stephens.

Estill is a 6-3, 215-pound experienced outfielder.  He is a former 8th round selection of the White Sox in the 2007 draft.  In his early years of Pro ball, Estill was regarded as a potential five-tool player.  According to scouts, he had all the goods; speed, power and an outstanding arm are his best attributes.  He has since suffered some injuries and is looking for 2011 to be his big comeback year.  From doing research on him and hearing some things about him from manager Phil Warren, I'm a big fan already.

Phillips is a former Ole Miss Runnin' Rebel.  He is another in a long line of former SEC ballplayers to suit up for the Grizzlies.  Mike Breyman (Kentucky), Alex Kubal (Alabama) and Chris McClendon (Kentucky) are just a couple names that ring a bell immediately (they are all former Grizzlies).  Phillips had a nice college career and played seven games with the Washington Wild Things last year.  The upside on Phillips is pretty high, IMO..we'll see come May.

Stephens-the final guy I will touch on today-has been outstanding everywhere he has gone.  He had a monster career at The Ohio State University.  The 6-1, 210-pound Stephens batted .360 with a team-best ten home runs for the Buckeyes in 2010.  A former JUCO All-American and All-Big 10 performer, Stephens will battle for an outfield spot with Gateway in 2011.

That will wrap it up for today.  Coming up next in the blog, I'll get you up to date on the returning Grizzlies pitchers.  One of the top starting pitchers in the league, Mark Brackman, headlines that list.  More to come.  Stay tuned Grizzlies fans.  Thanks for stopping by!
Posted by Adam Young at 3:44 PM