Hello all!  The Grizzlies hit the road for the first time in the second half as they take on the Slammers in Joliet starting today (Monday).  Gateway enters action in fourth place in the West Division while the Slammers are in fifth.  The Grizzlies are involved in a big log jam in the West Division.  Schaumburg, Windy City, River City and Gateway are all within five games of each other. 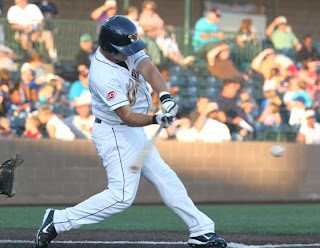 Gateway picked up their third walk-off win of the season on Saturday night.  It was a thriller at GCS Ballpark which resulted in a Justin Dunning (all photos courtesy of Paul Baillargeon/Action Imaging.com) walk-off RBI single.  It was great to see the local product (Trenton, IL) provide the heroics and help out his team in a big way.  He wasn't the only one who contributed..it was a team effort..Jon Myers went 4-for-4 with three doubles while having a career night and the pitching was outstanding.  Tim Brown went 8-plus and Richard Barrett pitched two hitless innings to get his first win of the summer. 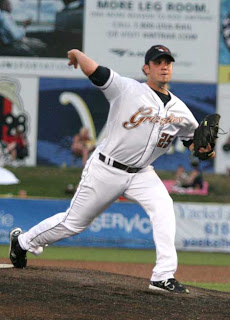 Right-hander Alex Kaminsky gets the start tonight for Gateway.  It will be his first start since July 4th.  After the three games with the Slammers, the Grizzlies return home for six on Thursday with Schaumburg and Rockford.  The playoff race is heating up..it's going to be a fun second half.  Go Grizzlies!

-Voice of the Grizzlies, Adam Young