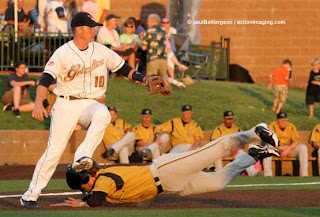 Time for the second half of the season to begin!  Gateway returns to action Thursday night @ GCS Ballpark when they take on the Florence Freedom.  The Grizzlies are 25-23 heading into the final 48 games of the season.  The West Division race is tight at the midway point, with the Grizzlies only four games back of first place Schaumburg.

Gateway made a big splash with the signing of former St. Louis Cardinals prospect Brett Zawacki Wednesday morning.  He was drafted 12th round in '07 out of HS and has outstanding stuff.  He had a good season in '10 at High-A Palm Beach and appeared in 20 games at Double-A Springfield in '11.  No word yet on whether Zawacki will start or relieve for Gateway. 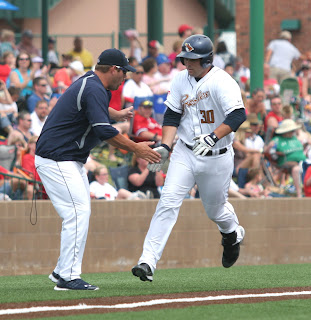 The Frontier League All-Star game was Wednesday night in Normal.  Gateway ace Tim Brown got the start on the mound for the West Division and surrendered a home run to Traverse City infielder Jose Vargas.  Jonathan Johnson went 0-1, Jerod Yakubik 1-2 and Landon Hernandez finished 1-1, all in a reserve role.

Gateway will enjoy a favorable second half schedule, full of home games.  The Grizzlies will play 9 of their first 12 games in the second half @ home.

Talk to you on the Grizzlies Radio Network Thursday night @ 6:50 with the Budweiser Pregame Show.  Go Grizzlies!

-Voice of the Grizzlies, Adam Young
Posted by Adam Young at 10:27 PM