Hello all!  The Grizzlies and manager Phil Warren have been busy the last couple of weeks re-signing a trio of players who were key members of the 57-win team in 2012.  Landon Hernandez, Antone DeJesus and Tim Brown are all returning to the Grizzlies for the upcoming season.  Below is my interview with the Grizzlies skipper, regarding the signings. 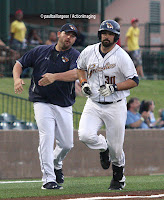 2013 will mark the fourth season @ Gateway for Hernandez, who was an all-star last season.  Hernandez has hit 36 home runs and driven in 107 runs in 206 career games over three seasons with the Grizzlies.  Last season he put .247/16/49 in 75 games while dealing with an injury midway through the season.  Known for his defense as well, Hernandez has thrown out 36% of attempted base stealers in 3 seasons.  The veteran catcher has had a steady career, but Warren is challenging Hernandez to be even better in 2013.  He thinks 'Lando' can be the best player in the league. 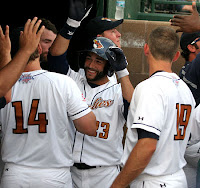 DeJesus returns for his second season.  He was a solid player for the team playing in 93 games and batting .270 with 5 home runs and 46 RBI, which is right at his career averages.  DeJesus has hit .271 in his six-year career with 98 extra base hits and 66 stolen bases in 481 games.  He was drafted in the 16th round of the 2007 MLB Draft by St. Louis, reaching Double-A Springfield in 2010. 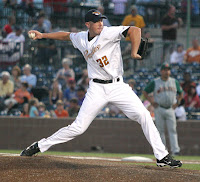 How about these numbers on Tim Brown.  He went 8-1 in his last 11 starts and didn't lose at hitter-friendly GCS Ballpark during the regular season.  Tim suffered his last regular season loss on June 6th and pitched into the seventh inning in 19 of his 20 regular season starts.  Brown was named the Grizzlies Pitcher of the Year.  He is currently pitching in Australia during the offseason.

-Voice of the Grizzlies, Adam Young
Posted by Adam Young at 1:01 PM