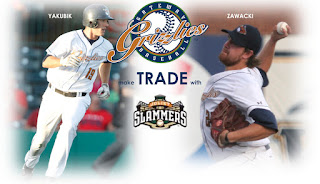 It's only mid-January, but the Gateway Grizzlies and manager Phil Warren have already been active with player transactions.  Some key players have been re-signed in recent weeks and the Grizzlies made a big trade with the Joliet Slammers and their new manager Mike Breyman (former Grizzlies hitting coach) yesterday.

The current Grizzlies roster has 8 position players and 9 pitchers, more than many of the teams around the league at this point.  Nearly all of the names are familiar to Grizzlies fans with a few newcomers trickled in.  Warren is making an attempt to bring back many of the players from the 57-win team of 2012.  I'm assuming there will be roughly 35 players in camp again this spring training, making for an exciting preseason.

The return of Frias is exciting.  He had a 15-game stint with High-A Daytona in the Cubs organization after playing in 32 games with the Grizzlies last year.  He's one of the best defensive infielders the Grizzlies have ever had and his offense started to come around as well.  The Dominican Republic native should be a star in 2013.

Hernandez returns as the Grizzlies starting backstop.  Warren told me earlier today, he thinks Hernandez could AND should be a 20+ HR guy..he hasn't played a full, consistent season yet.  If he does, he could be one of the top players in the league.

Barrett and Enourato are experienced right-handed pitchers who are proven in the league.  Both are great clubhouse guys.  Barrett collected a team-high 17 saves last season while Enourato went back and forth between the 'pen & rotation.  He made a big playoff start and delivered in Florence, KY..

Myers, McClendon and Johnson (pictured left) were three of the most important pieces to the Grizzlies offense last season.  Myers had a monster second half and in my opinion is as talented as they come.  McClendon returns for his fifth season in the league and has the chance to be one of the leagues best again year.  Meanwhile, Johnson was the team MVP a season ago and many fans would say no player is more fun to watch than JJ.  He's Gateway's anchor on offense and a dynamite defensive infielder.

Finally, Treece (pictured right) returns for his second season after dominating the league in his rookie campaign.  Known for his devastating slider, Treece is a star in the making.

That move brings Kaminsky closer to his hometown of Fostoria, OH.  He will play his games only about an hour and a half away from Fostoria in Avon, OH.  Best of luck to Kaminsky, who won 10 games for the Grizzlies in 2012.

Cotilla (pictured left) is an exciting young pitcher.  He was drafted three times, most recently in 2009.  In fact, he was drafted 15th round in 2007 out of High School.  The Grizzlies manager is excited to have a healthy Cotilla for the 2013 season.

-Voice of the Grizzlies, Adam Young
Posted by Adam Young at 11:31 AM