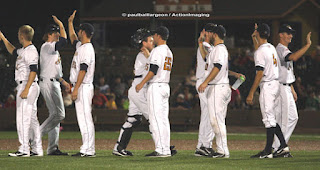 Hello all!  After a thrilling 10-6 victory last night in Traverse City, Michigan, the Gateway Grizzlies are back home and looking to clinch the Frontier League West Division this weekend when they take on the Rockford RiverHawks.  The magic number was reduced to one with the Grizzlies win and Boomers loss Thursday night.

Grizzlies DH Rogelio Noris had a career night last night in Traverse City.  He became the third Grizzlie to hit 3 HR's in a game and the first to do so since Ryan Sullivan in 2005.  It was also the first 3 HR game in the Frontier League since Travis Garcia in 2007.  Here's the Radio Call of Rogelio's third HR..it was undoubtedly my most excited call of the season.

The Grizzlies will look to become West Division Champions for the the first time since '07 when they take on the RiverHawks tonight at 7:05.  It would be the Grizzlies first playoff appearance since '08.  Can't wait!

-Voice of the Grizzlies, Adam Young
Posted by Adam Young at 10:33 AM