The Grizzlies opened up the home portion of their 2011 Exhibition Schedule this afternoon.  What was supposed to be a nice, sunny day at the ballpark didn't turn out as planned.  Playing through three different spurts of rain, the Grizzlies fell to the Southern Illinois Miners 8-1.  Despite the rain, 1200+ youngsters showed up for the day game and the Grizzlies drew roughly 3,000 for their Exhibition home opener.  The play on the field wasn't as good as it was on Saturday for the Grizzlies, but we were still able to find some bright spots. 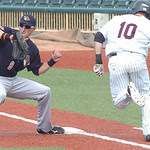 *Logan Parker (pictured right) went 2-for-3 today.  Logan, a former Reds farmhand, is as talented as they come and will be a key part of the Grizzlies offense once again this season.  Parker spent spring training with the Rockies, and despite playing well, ran into unfortunate luck which brings him back to Gateway.  Parker is a doubles machine with really good pop.  After watching him in BP a couple of times, you can just tell that the ball comes off his bat different.  It always has zip and it seems so easy to him.  It's almost as if he is using no effort.  I'm really looking forward to watching Parker on a daily basis.
*The Grizzlies only had 4 hits as a team in the 10-inning EXH game.  Parker had half of those 4 and Ryan Khoury had another.  The former Red Sox prospect has been as good as advertised so far.  Khoury is now 3-for-5 in two games.  He is doing a good job in the No. 2 spot.  He sees a lot of pitches and gets on base at a high clip.  His offensive production is going to be critical in front of the big boppers (Parker, Lyndon Estill, Charlie Lisk, Jason Patton, etc.)
*Grizzlies pitching struggled a little bit today, but for the second straight outing Mark Brackman and Aaron Shafer threw the ball really well.  Brackman is picking up right where he left off last season.  The 6-7 right-hander has started both Exhibition games, throwing two scoreless innings in both games.  Shafer was once again the second pitcher used.  He followed up his scoreless inning on Saturday with two scoreless innings today.  Here's the scouting report on Shafer (as told by Lisk).  88-93 MPH with his fastball..great sink to the fastball (I could tell the incredible movement from the pressbox)..free and easy with his delivery...great breaking ball and plus changeup..can throw all of his pitches for strikes and with confidence.  Lisk raved about Shafer, as is everyone else.  Brackman and Shafer could form an unbelievable 1-2 punch in the starting rotation.  You add in B.J. Dail and the Grizzlies should have a dynamite top of the rotation.

So that's the story from today's EXH game.  The Grizzlies are back at it tomorrow morning @ Southern Illinois.  It's a 10:00 start and I won't be traveling with the team for that game.

Grizzlies have a road EXH game on Sat. night @ River City and then the Grizz play @ home against RC on Sunday.  Don't forget next Wednesday (May 18th) the Grizzlies will play Southern Illinois University Edwardsville in an EXH game.  Joe Pott, the former Voice of the Grizzlies and current SIUE Play-by-Play man, and I will have the call on 590 AM KFNS.

Regular season opener next Friday @ home against Southern Illinois.  Myself and Alex Cohen, my radio partner in 2011, will have the call on the Grizzlies Radio Network (590 AM KFNS, 1400 AM KJFF, gatewaygrizzlies.com, kfns.com).  If you can't make it to GCS Ballpark, I hope you tune in!
Posted by Adam Young at 10:33 PM